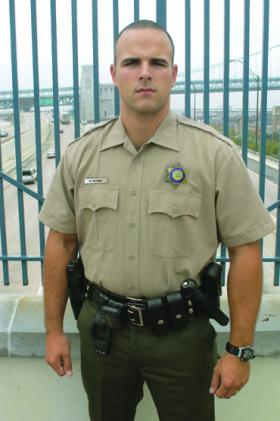 In the United States of America the role of a sheriff varies dramatically between different states and counties. The sheriff is usually a county official, the enforcer of the county court. In urban areas, some sheriffs may be restricted to these court duties, such as overseeing the county jail, courtroom security, detainee transport, serving warrants, service of process or police administration. Sheriffs may also patrol outside of city/town limits or jurisdiction. In many rural areas, sheriffs and their deputies are the principal form of police. It has become increasingly important to be able to differentiate between typical Police Officers and the Sheriff’s office. The iconic sheriff’s uniform does that very job as it is markedly different than the traditional police uniform.

As opposed to the traditional dark blue uniform of most police agencies, Sheriffs and Deputies often wear a 2-tone uniform combination of either lighter khaki on top and darker brown on the bottom or the reverse.  The shirts are a button-down uniform shirt, either short sleeved or long sleeved and often have a shoulder patch reading “SHERIFF” across the top in some manner.  The pants usually have a stripe affixed to the outside seams.  Sheriff’s uniforms also usually include normal uniform accessories like a gold colored, seven-point metal badge and a gold nameplate.

The reason for the mixed light / dark combination of the sheriff uniforms have a lot to do with the psychology of color.  As Richard R. Johnson, M.S. talks about in his report “The Psychological Influence of the Police Uniform”, there was an experiment that presented test subjects with 2 types of paramilitary uniforms.  One was the traditional dark blue worn by most police agencies and the other was a khaki shirt and dark green pants traditionally worn by California sheriff deputies.  Although both uniforms ranked similarly as good, honest, helpful, and competent, the lighter colored sheriff uniform rated noticeably higher for warmth and friendliness.  What they gathered from these results was that a uniform which is only half dark sends a better message that the all blue/black uniform.

Sheriffs have served and protected the English-speaking peoples for a thousand years and over those many years, the uniforms have changed and are universally as unique as the individual Sheriff’s around the country.  While some sheriff uniforms follow this traditional brown / tan combination of colors, others use other combinations of browns and greens or all greens or grays.

Whatever the color of their uniform, a sheriff is generally, but not always, the highest law enforcement officer of a county.  As Thomas Jefferson wrote in his THE VALUE OF CONSTITUTIONS, “the Office of Sheriff is the most important of all the executive offices of the county.” The office of Sheriff is certainly significant, and was in fact the first county office established in the United States. Some very outstanding Americans have held the office of County Sheriff, from the earliest days down to our present era.